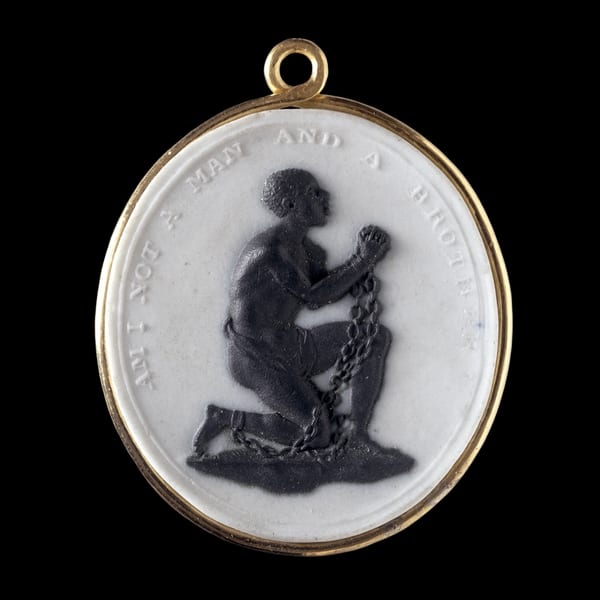 English potter and prominent abolitionist Josiah Wedgwood issued this jasperware medallion in 1787. It has an applied relief of a supplicant slave in chains with “Am I not a man and a brother?” inscribed around the slave. The medallion was modeled after the seal for the Committee for the Abolition of the Slave Trade, founded in 1787 by the English abolitionist Thomas Clarkson. In February 1788, Wedgwood sent medallions to Benjamin Franklin in Pennsylvania; they were an immediate success. Clarkson wrote: “some had them inlaid in gold on the lid of their snuff-boxes. Of the ladies, several wore them in bracelets, and others had them fitted up in an ornamental manner as pins for their hair. At length the taste for wearing them became general, and thus fashion…was seen for once in the honourable office of promoting the cause of justice and, humanity and freedom.” The design was also used in printed form on plates, enamel boxes for patches, as well as on tea caddies and for tokens, and later on printed broadsides as abolitionist propaganda (see “Am I Not a Man and a Brother?” atop John Greenleaf Whittier’s “Our Countrymen in Chains!,” 1837).