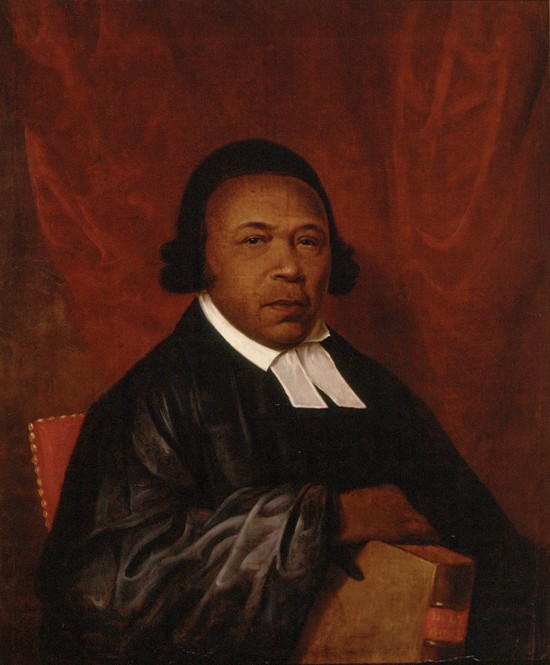 Born a slave in 1746, Absalom Jones came to be regarded (along with Richard Allen — see “Portrait of Richard Allen”) as one of the leaders of Philadelphia’s vibrant African American community. Jones bought his own freedom as well as that of his wife’s through years of hard work, and went on to found the Free African Society with Richard Allen, and eventually led the African Church of St. Thomas in Philadelphia, the first black Episcopal church in the United States. The most widely recognized image of the Reverend Absalom Jones, completed sometime prior to the winter of 1810, displays a dignity rarely allowed African subjects in 19th century art. The portrait, which focuses on Jones’s face and upper body, shows Jones in his ecclesiastical robes, with Bible in hand, emphasizing his role in the African American religious community. While the style is simple, it is reminiscent of formal paintings of European clergy. This refined style was a concerted product of the painter, Raphaelle Peale, the oldest surviving child of the prominent Philadelphia portraitist Charles Willson Peale. The senior Peale was pleased to discover that his son had “painted a Portrait in oil of Absalom Jones a very excellent picture of the Rev’d. Gentleman.”