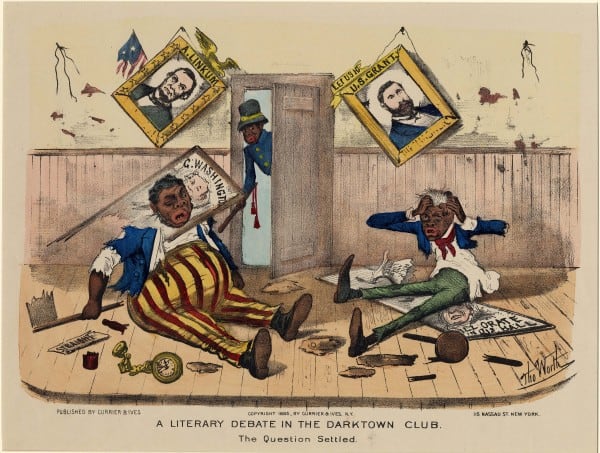 Though negative racial stereotypes of African Americans were not new (see “Grand celebration ob de bobalition ob African slabery” in the Images section), post-Reconstruction white America sought out greater numbers of these degrading images as fears of racial uplift and conflict grew. The firm of Currier & Ives, a well-respected and known print company, produced a series of demeaning images of African Americans known as the Darktown Comics between the mid-1870s to the early 1890s. Previous to the Emancipation Proclamation, Currier & Ives generally depicted blacks as individuals content with their lives and position in society, often pictured in the background of idyllic plantation images. After the Proclamation was issued, there was a short period when the firm published positive images of blacks and portraits of important abolitionist. With time, as freedmen began to ascend the social ladder in cities around the US, it became more apparent that not all northerners were unanimous in their support of emancipation and the status of the freedman. The political images published by Currier & Ives during this time were vicious attacks against the character and intelligence of blacks, propagating and prolonging the humiliating stereotypes of Jim Crow.