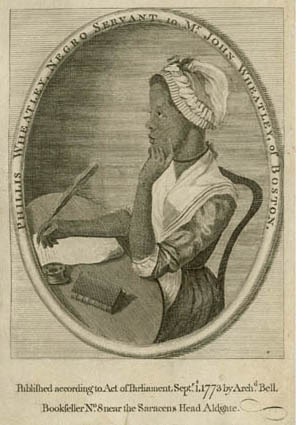 The first African American, first slave, and third woman in the United States to publish a book of poems, Phyllis Wheatley was kidnapped in West Africa and brought to Boston as a slave in 1761. Purchased by John Wheatley for his young wife, Phyllis astounded the young couple with her intelligence. Learning to speak and read English in a very short time, Susannah Wheatley encouraged Phyllis to study theology and the English, Latin and Greek classics. Phyllis published her first poem in 1767, and six years later, she published a book, Poems on Various Subjects . That same year, John Wheatley emancipated her. Wheatley achieved international renown, traveling to London to promote her book and being called upon as well as received by noted social and political figures of the day. This profile image included at the beginning of her book of poems and attributed to enslaved artist and writer Scipio Moorhead, was a very unusual style for picturing any black person in the eighteenth century. Phyllis wears the dress of a respectable white woman, with her hair in a bonnet and a neat dress. Most interestingly, she is pictured at her writing table in the process of writing, a reinforcement of the fact that the set of poems coming after this image were indeed written by a black woman. Moorhead’s use of this particular stance is a reference to a then-popular European portrait style that pictured wealthy, intellectual women in a pensive state at their writing table.