The United Nations lists the number of contemporary slaves at 21 million. Scholar Kevin Bales estimates the figure to be 27 million.  During the entire three hundred year history of the transatlantic slave trade, 12.5 million Africans were brought in chains to the new world.  That means that there are approximately twice as many slaves today as there were Africans transported across the Atlantic.

Slavery is different today than it was during the era of the Atlantic slave trade. While historical slavery was legal, slavery today is illegal in every country in the world. This means that slavery today is usually hidden. Highly public slave auctions have been replaced by secret trafficking. Similarly, slaves in the antebellum United States were very expensive. Only wealthy Americans could afford more than a few slaves, whereas today, slaves have never been cheaper. Since slaves no longer represent a major financial investment, they can be worked to death or abandoned with with less financial consequence. This is why scholar Kevin Bales calls modern slaves disposable peoples.

There are many kinds of slavery today, but we will look at three of the most common examples.

The United Nations defines debt bondage as “the status or condition arising from a pledge by a debtor of his personal services or of those of a person under his control as security for a debt, if the value of those services as reasonably assessed is not applied towards the liquidation of the debt or the length and nature of those services are not respectively limited and defined.” This very complicated legal definition simply means that debt bondage is the use of slavery as a means of repaying debts. Students of American history may find it useful to think about debt bondage as a modern form of indentured servitude. In the seventeenth and eighteenth centuries, wealthy landowners would pay for the passage of poor men and women in return for about seven years of unpaid work.

Today, it is illegal for anyone to accept the body of another person as collateral for loans, but the practice is still widespread, particularly in developing nations. 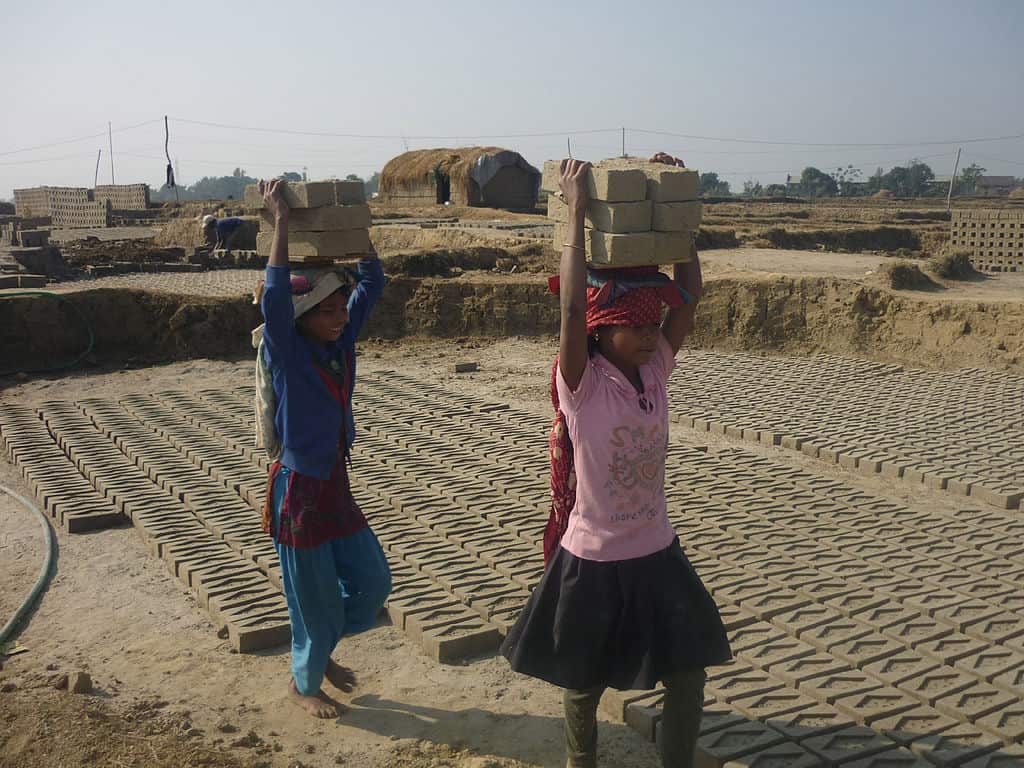 Up to 1.7million children from the age of five are working in illegal brick factories in Pakistan . They work up to 14 hours a day with little food, no sanitation and little pay

India has more slaves in it than any other nation in the world, and debt bondage is a common practice in Indian agriculture. After a rash of suicides by agricultural laborers in the Indian state of Maharashtra, the local government passed the Money Lending  Act in 2008. This law criminalized the high interest rates that led to debt bondage. Two years later, the state government passed a law preventing non-licensed lenders from trying to collect payments. Payments on these unlicensed loans often turned into debt bondage contracts that were then levied against children. A 2003 study from Human Rights Watch estimates that at least 350,000 debt bonded children are working in the Indian silk industry, including a young girl named Yeramma.  Yeramma described her life as follows:

At 4:00 a.m. I got up and did silk winding. . . . I only went home once a week. I slept in the factory with two or three other children. We prepared the food there and slept in the space between the machines. The owner provided the rice and cut it from our wages. He would deduct the price. We cooked the rice ourselves. We worked twelve hours a day with one hour for rest. If I made a mistake-if I cut the thread-he would beat me. Sometimes [the owner] used vulgar language. Then he would give me more work.

Sex slavery is the term for the exploitation of women, men or children in the commercial sex industry. This industry includes prostitution, pornography, strip clubs, or other forms of sexual entertainment where money or other items of value are exchanged for a sex act. An important caveat is that a person’s initial consent to participate is irrelevant if that person is held in service against their will, either through force or manipulation.

Adult women make up the largest group of victims of sex slavery, followed by girl children, although men and boys are enslaved in the sex industry as well.The majority of sex trafficking is international, with victims taken from such places as South and Southeast Asia, the former Soviet Union, Central and South America, and other less developed areas and moved to more developed ones, including Asia, the Middle East, Western Europe, and North America. Each year, an estimated 800,000 women and children are trafficked across international borders, but the majority of sex slaves never cross a border. The United States not only faces an influx of international victims but also has its own homegrown problem of interstate sex trafficking of minors.

An estimated 293,000 American youths currently are at risk of becoming victims of commercial sexual exploitation. The majority of these victims are runaway or thrown-away youths who live on the streets and become victims of prostitution. These children generally come from homes where they have been abused or from families who have abandoned them. Often, they become involved in prostitution to support themselves financially or to get the things they feel they need or want, including drugs.

Other young people are recruited into prostitution through forced abduction, pressure from parents, or through deceptive agreements between parents and traffickers. Once these children become involved in prostitution, they often are forced to travel far from their homes and, as a result, are isolated from their friends and family. Few children in this situation can develop new relationships with peers or adults other than the person victimizing them. The lifestyle of such youths revolves around violence, forced drug use, and constant threats.

The Thirteenth Amendment abolished slavery in the United States “except as a punishment for crimes whereof the party shall have been duly convicted, shall exist within the United States, or any place subject to their jurisdiction.” This important caveat enabled the continuation of slavery in the American South after the Civil War.  Using unjust laws, tens of thousands of black Americans were arrested and forced to repay impossibly high fines. When they were unable to pay, they would be forced to work off their fine through labor. Government officials leased these prisoners to companies large and small. For tens of thousands of Americans, the United States government perpetuated slavery through the process of prison labor.

Learn more about how prison labor perpetuated American slavery with this interview from historian Douglas Blackmon, author of Slavery of Another Name: The Re-Enslavement of Black Americans from the Civil War to World War II.

Racial discrimination endures in the American justice system, and prison labor remains big business.  In fact, over the past few decades, the number of corporations using prison labor has grown considerably. Major American corporations including IBM, Microsoft, AT&T, Macy’s, and many more currently use contracted prison labor. From 1980 to 1994 profits in the prison labor industry grew from 392 million to 1.31 billion dollars. Prisoners face the choice of working for little or no pay or risk punishment including solitary confinement or even the withholding of food. At state penitentiaries, most workers receive the minimum wage, but those in privately run prisons (a rapidly growing industry) receive as little as seventeen cents an hour.